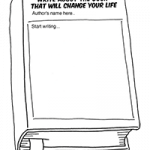 A man who has worked in some of London’s best old bookstores writes about what a good bookstore should feel like. ’’I want dirt. I want chaos. I want, above all, mystery,’’ he says. ‘’I want to be able to step into a place and have the sense that there I’ll find a book, as yet unknown to me, which to some degree will change my life.’’

I think that is a hope we all have. What would such a book be like, according to your need?

Thie promt came from ideas in “A Factoturn in the Book Trade: A Memoir” by Marius Kociejowski

How is living through school lockdowns, hearing about mass shootings and experiencing regular shooter drills at schools affecting your mental health? What do you do to cope? What more can be done to make life better? Please look at this page as a safe one to express what is in your heart.

There is a new business which says it specializes in ”building ingeniously hidden rooms” for clients who crave ”a secret reading nook and that it only appears when you say the words ”Open Sesame’’’ The company said it could even place ‘’a door in a grandfather clock that led to a secret garden.’’ If you could afford to work with this business, where would you like to place your own hidden nook (maybe under your bed) and for what use would it play in your life? What magical words would you have to say to open the door to your secret place? Would you give this secret nook a special name?

(The idea for this writing prompts came from the book, ‘’Under Lock & Skeleton Key,’’ by Tempest Rajl.)

All eyes on turned to what’s happening to the Ukrainian people as Russia wages war against their county. It may seem that there is little we can do from our own countries to help these beleaguered people, but we CAN write their stories as we put ourselves in their places through our rich imaginations. By writing we understand better.

We are the group of teens who have placed themselves in the middle of the road to block the Russian troops from using the highway to invade their city. What are they saying and thinking as they position themselves in front of the tanks? What are the tank drivers thinking?

We are the young couple with an eight-month-old baby trudging by foot for 20 miles to get to the borders to Poland to escape the war. What are they thinking as they move so exhaustively without much food or water. What are their fears and hopes? What were they able to take with them? Does anyone help them?

They are the old Ukrainian women who confront the Russian solders to their town and tell them to take the pumpkin seeds they offer and place them in their pockets so that when they die sunflowers will grow on their graves. How do they overcome their fears to say this? What do the Russian soldiers think or say in response?

They are the young people sleeping in the underground subway to escape the bombings of Kyiv. What is going through their heads? What are they saying in their prayers?

You are Russia’s leader Vladimir Putin who has started this war against Ukraine. What can he be thinking? What are his dreams or fantasies about waging such a terrible war? When most of the world hates what you are doing, how do you face yourself in the morning? What goes on in your mind as you look in the mirror?

You are a Russian high school student in Moscow trying to muster the courage to protest against the war. You are frightened by the police. What do you say to yourself to gain courage?

Write about any of these people — the are human like you and need to hear their stories told.

YOU CAN ALSO CREATE A COMIC STRIP AT MAKEBELIEFSCOMIX.COM FOR YOUR STORY!

There’s a new book, ”The Cabinet” by Un-su Kim, which describes an office worker who, ”while navigating the extreme boredom of his office job, discovers Cabinet 13: a filing cabinet filled with extraordinary accounts of ‘symptomers,’ people experiencing strange and marvelous occurrences and abilities…symptomers describe sleeping for months (”torporers”), seeing their doubles (”doppelgangers”) and growing gingko trees from their fingers (”chimeras”). The office worker starts interviewing them to hear their stories. What do they tell him?

For more than 10 years an artist has been writing every word of Marcel Proust’s ”In Search of Los Time” on grains of rice. When finished he plans to place all the words inscribed on these rice grains in a giant hourglass. It is said that there also was once another artist who painted a polo horsemen scene on a grain of rice. These are amazing feats.

What if you could do these things, too, such as write words of grains or paint a scene on a grain of rice? What book would you choose to inscribe its words on rice grains, or what kind of scene would you want to draw on a rice grain?

Or, better yet, what kind of extraordinary artistic achievement would you like to undertake?

See all publications and offerings from the author Bill Zimmerman.

Create your own comix, print and
e-mail them.